We waste too much food because it is too cheap according to Jason Clay, the Senior Vice-President for Market Transformation at the World Wildlife Fund. If we were to include the cost of the impact of food production (the externalities) food would cost twice as much. The World Wildlife Fund was established over 50 years ago to protect nature, but faced with the enormity of the task, 20 years ago they determined that food production  was the biggest threat to biodiversity.

In his 2010 Ted talk Jason Clay identified that 300 to 500 companies control 70% of the connections between producers and consumers in each commodity. Just 100 companies control 25% of that trade. These companies are typically motivated to optimise their profits and the food supply chains continue to get longer. As value is extracted in the middle of the chain, the rewards for producers diminish. Ironically and tragically, millions of small farmers don’t have enough food. 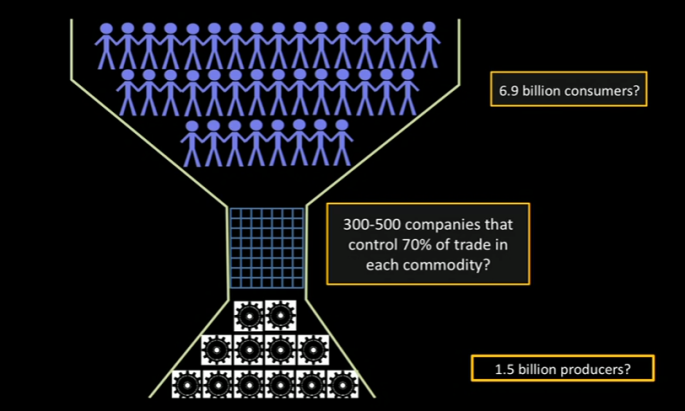 The bottleneck in food systems (from Jason Clay’s TED talk, 2010)

Jason Clay’s thinking is directly relevant to Northland and our move to more sustainable food systems. We want to see more local producers, less processed food and closer connections between producers and consumers.

The other important work for the World Wildlife Fund is working with inefficient  producers that tend to create more damage environmentally and the failure of governments to enforce regulations – again relevant in Northland.

One thought on “A better environment and sustainable food systems”